MaxVal conducted a targeted search for worldwide patents and applications relating to wrist-worn activity trackers. Our study reveals a sharp spike in patent publication activity beginning in 2014 and continuing to the present day. Incidentally, 2014 also witnessed the entry of Apple in the activity tracker segment. 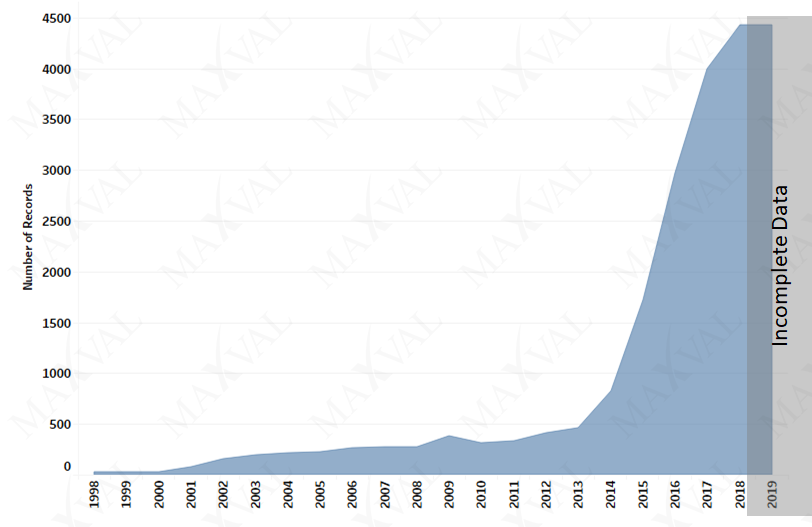 Activity trackers (or fitness trackers) are specialized devices that contain sensors and circuitry to translate human vital signs and movement into different forms of data. The tracking devices are coupled to a smartphone or computer for data upload to a server. For instance, the collected data can be for measuring step counts or workout intensity. The activity data is analyzed and visualized via apps to provide users with feedback. Wrist-worn activity tracking devices are typically in the form of a band or smartwatch. They fall under the smart wearable segment which also include smart glasses, body wear, ear-worn devices and others. The smart wearables segment was valued at 216.18 million units in 2019 and is expected to reach 614.31 million unit sales by 2025 at a CAGR of 19.1% (Source: Mordor Intelligence).

MaxVal conducted a targeted search for worldwide patents and applications relating to wrist-worn activity trackers. Our study reveals a sharp spike in patent publication activity beginning in 2014 and continuing to the present day (see figure below). Incidentally, 2014 also witnessed the entry of Apple in the activity tracker segment.

The inventions originate predominantly from the US, China, South Korea, Japan and Europe. These regions were also the top markets for patent filings (see figures below). 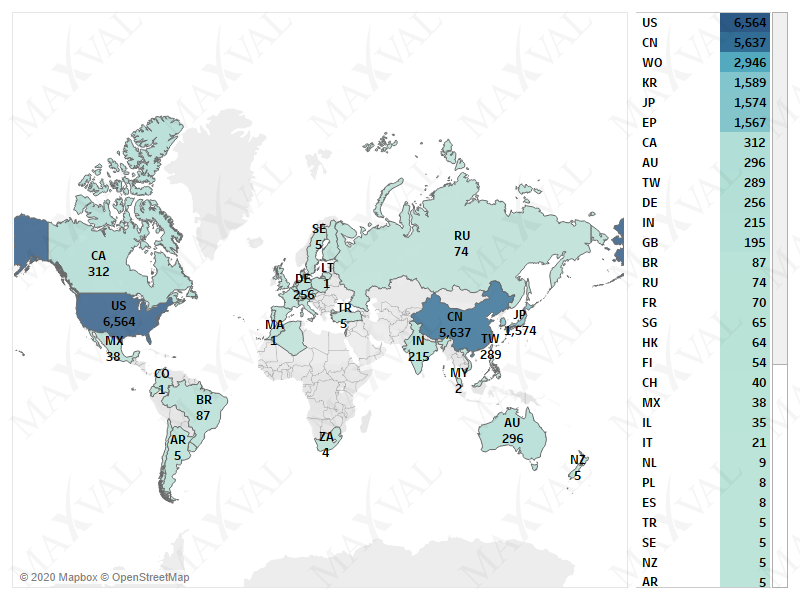 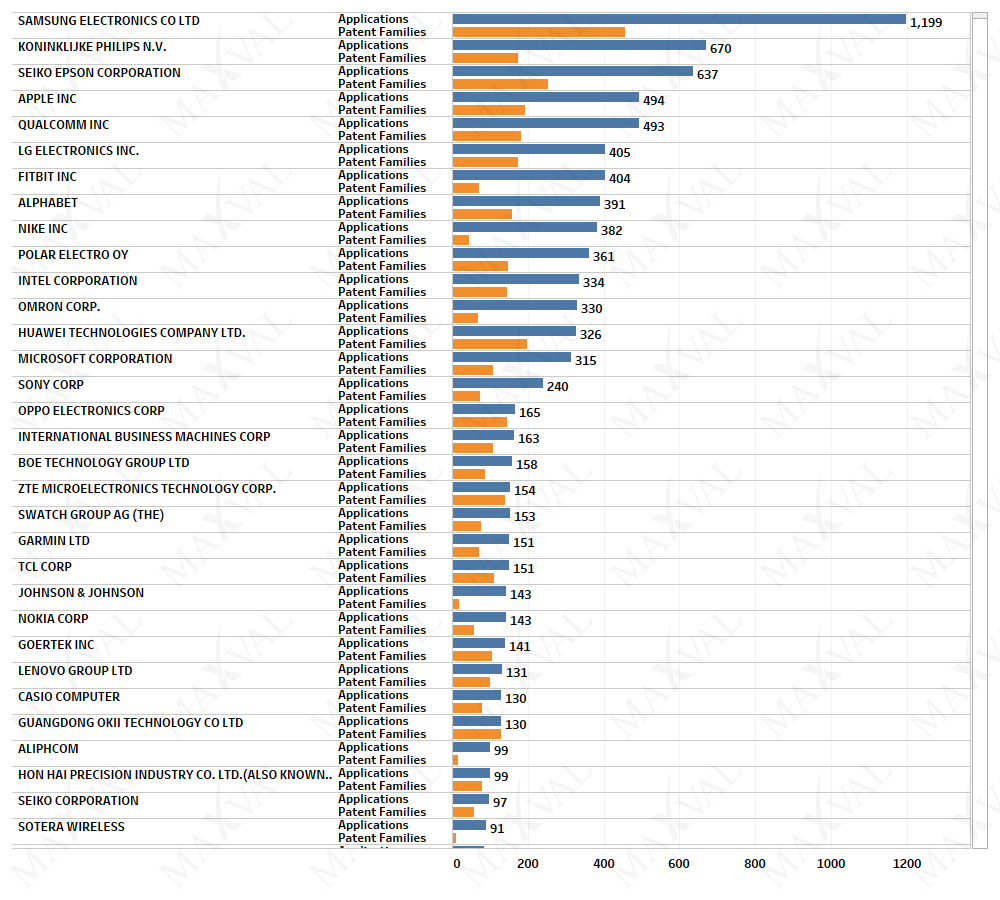 The top patent filers were further segmented based on their headquarters into US, Europe, and Asia-based companies as described below. 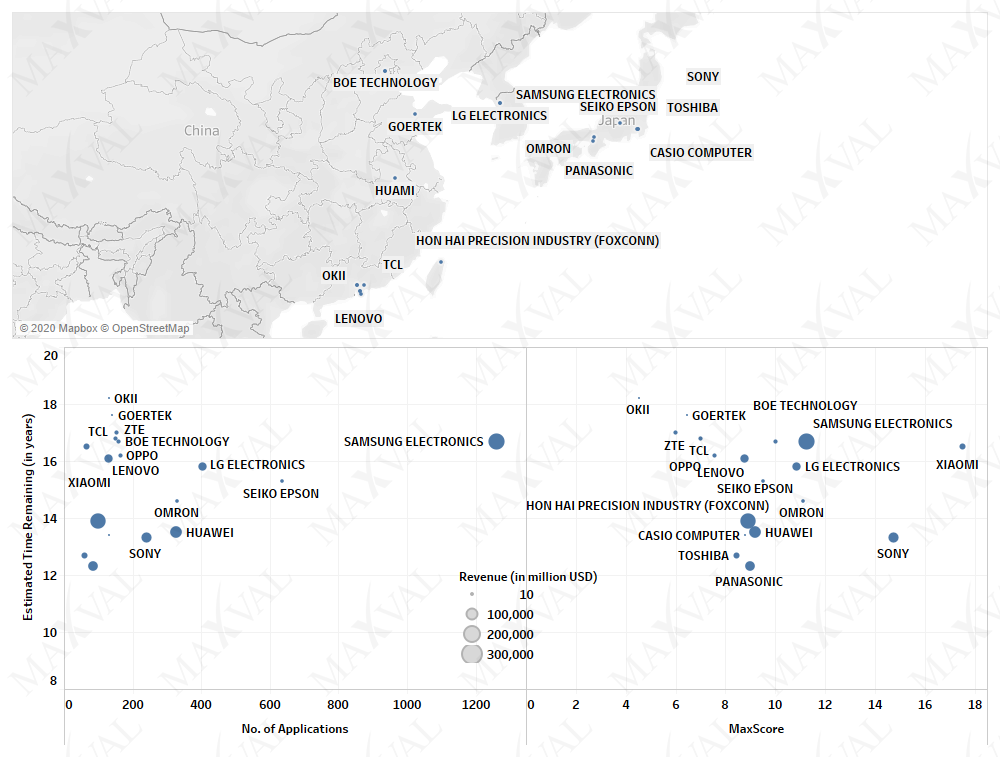 To illustrate the utility of Patent Livescape in making data-driven decisions, selected companies are discussed further below:

Google’s patent filings have exponentially increased since 2014, with a primary focus on the US, Chinese and European markets. The patent filings relate broadly to activity measurement for diagnostic or monitoring purposes. Despite the abundance of patent filings worldwide, Google does not (yet) have a hardware offering in this segment.

Google recently spent $40 million in acquiring an undisclosed smartwatch technology (and 20 engineers) from Fossil. The pending acquisition of Fitbit at $2.1 billion was recently highlighted by parent Alphabet’s executives as an area of opportunity. These acquisitions should fit well in the Alphabet ecosystem alongside other bets such as Wear OS, Google Fit, Google Assistant, Verily and Calico. Alphabet groups all the hardware (e.g. Pixel and Nest) and cloud products into its “other revenue” category. Interestingly, Google’s earlier acquisitions of HTC and Nest Labs sealed its entry into mobile and home hardware segments, respectively. The Fitbit acquisition could see the introduction of a “Pixel Watch”. 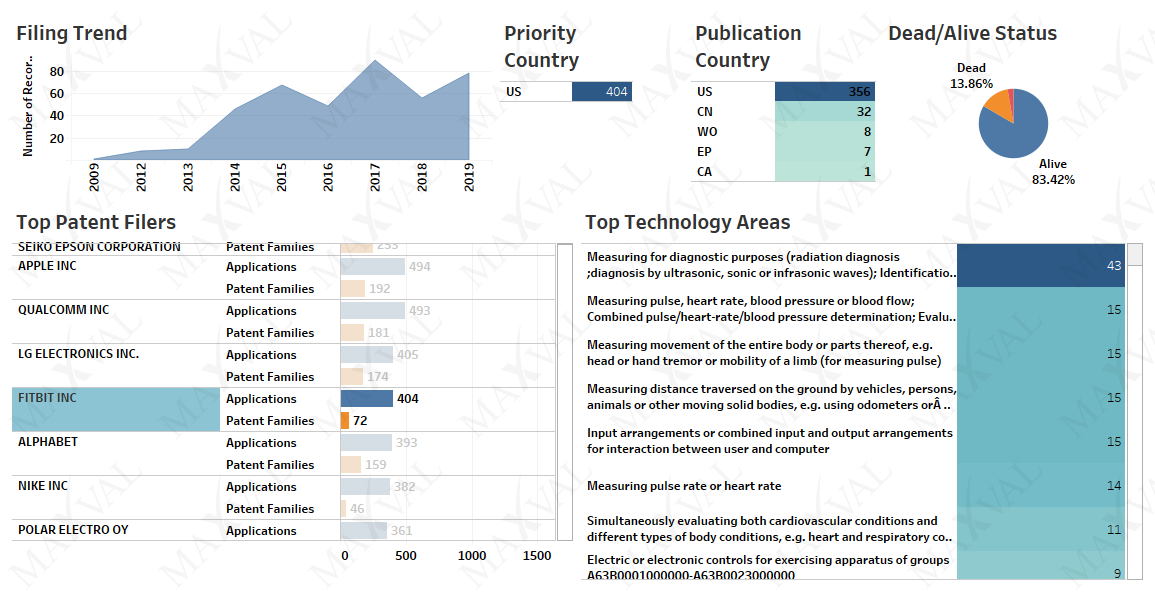 Fitbit’s patent filing rate in the last 5 years appears to follow a cyclical pattern. A drop in patent filings related to activity trackers is apparent in the year 2016 and 2018. The filings were predominantly focused in the US market. The patents relate broadly to activity measurement methods for diagnostic or monitoring purposes.

Fitbit has several products in their lineup including activity tracker bands and smartwatches. It had released its first activity tracker way back in 2009. Fitbit dominated the wrist-worn activity tracker space earlier, but has seemingly lost its dominant position in recent years to Apple. The pending Google acquisition may work out to be a good fit for Fitbit. Google’s unlimited resources, complementary bets, and expertise in cloud/AI/OS may benefit Fitbit.

Qualcomm’s patent filings relate broadly to the underlying silicon in a smartwatch/activity tracker. Not only did Qualcomm file more PCT applications than just about everyone (only Philips filed more), approximately 75% of its PCT filings were published in the last two years (2018 and 2019) indicating an emerging global focus in this segment.

Qualcomm offers system on chip (SoC) solutions for smartwatches and activity trackers including processing, connectivity and power management blocks. There are rumors of a next-generation SoC being developed by Qualcomm using a 12 nm fabrication process that will allow more powerful and power-efficient components desirable in smartwatches. While major players are increasingly turning to in-house developed SoCs for their needs (e.g. Samsung and Huawei) or procuring custom fabricated chips from their manufacturing partners (e.g. Apple and Fitbit), many of the emerging companies continue to depend on Qualcomm. These companies also use Google’s popular WearOS. Google’s acquisition of Fitbit whose products follow an apple-esque vertical integration of silicon to software adds uncertainty to Qualcomm’s investments in this area.

Apple’s patent filings have focused on the US market historically. Filings in China, South Korea, Japan, Australia and Europe have increased by more than two-fold for year 2019 which may indicate a growing interest in other markets.

Apple Watch is the only product in the activity tracker space from Apple. Apple Watch has been contributing to record revenues for Apple in the wearable segment. It commands 48% of the global smartwatch market and outsold the entire Swiss watch industry in 2019 according to a report by Strategy Analytics. 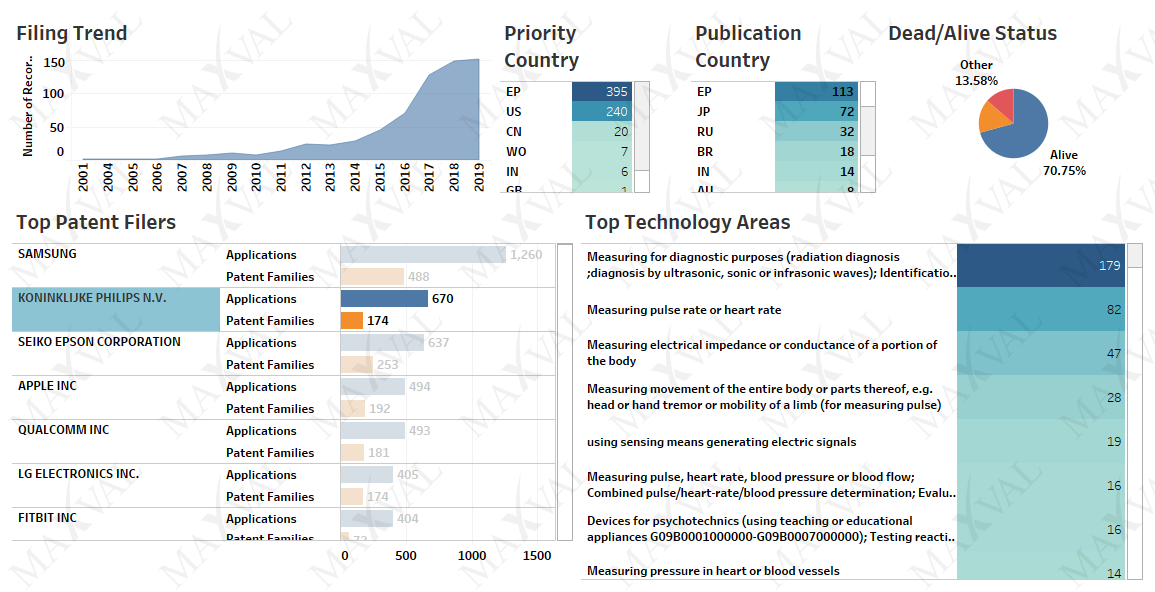 Philips is amongst the dominant patent filers worldwide for the shortlisted patents. Although it does not have a big market share in the consumer electronics segment, Philips is still considered to be a major player in the healthcare segment. It was recently reported that U.S. trade regulators will investigate an infringement suit filed by Philips before the International Trade Commission (ITC). ITC will investigate devices from US-based Fitbit, Garmin and Ingram Micro Inc. and China-based Maintek Computer Co. Ltd. and Inventec Appliances for alleged patent violation. The patents in question are US Patent Nos. 7,845,228, 9,717,464, 9,820,698 and 9,961,186. Interestingly, this is the second such case from Philips against Fitbit devices following a district court case filed last year by its U.S. entity involving the US Patent Nos. 6,013,007, 7,088,233, 6,976,958 and 8,277,377. (Source: Litigation Databank, MaxVal). 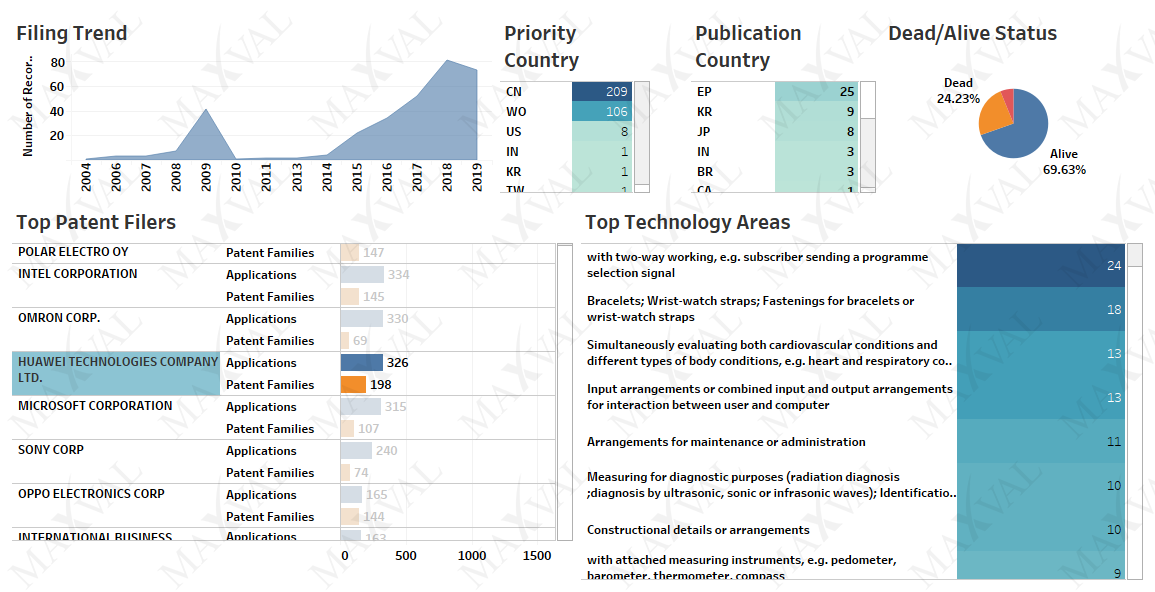 Xiaomi and Huawei have been reported to contribute to a large number of shipments of wrist-worn devices ahead of the likes of Fitbit and Samsung in recent reports (Source: 1Q 2019; IDC). Both companies boast of a product lineup of fitness bands and smartwatches. Yet, Huawei (13th) and Xiaomi (37th) are not amongst the top patent filers globally. The contrasting numbers may be due to a seasonal increase in device shipments or shipment of lower-value goods to emerging markets. It could also be due to their present focus on integration and off-patent technology. A deep dive based on patent information and product mapping is needed to understand these differences.

The smart wearable segment is one of the hottest growing segments. The competitive landscape for activity trackers can be sectioned into two groups, one group focusing on vertical integration of silicon through to software and a group consisting of individual component developers. So far, the market share seems to be dominated by the likes of Apple, Huawei and Samsung in the first group. There are also opportunities for other players as revealed by patent filings, M&A and litigation activity. A detailed clustering analysis of the patent landscape that focuses on identifying progress in individual hardware components, along with applications that tie down these individual components will give an insight into how the competitive landscape will evolve in the future.

Contact us to learn more about how Patent Livescape can help you make data-driven decisions based on MaxVal’s 3C data principle - correct, current and complete. 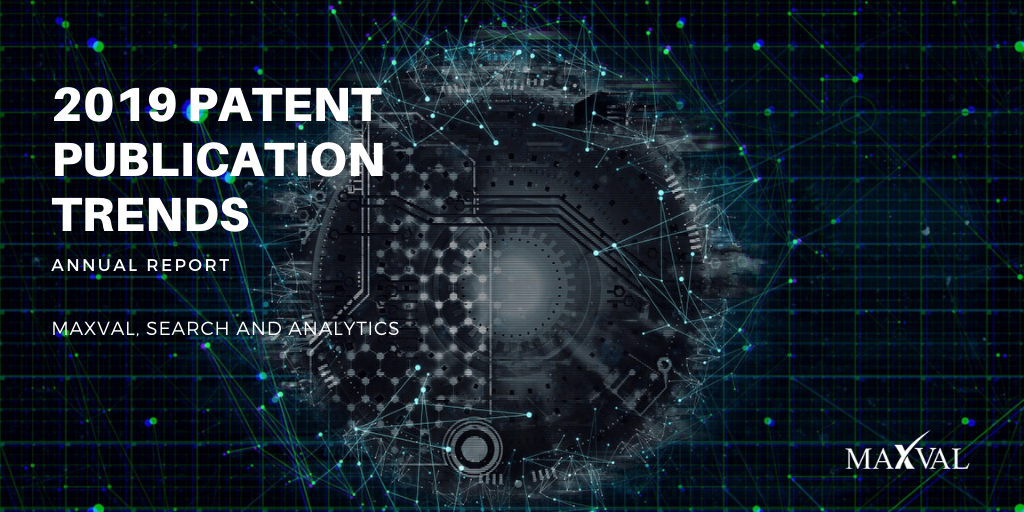 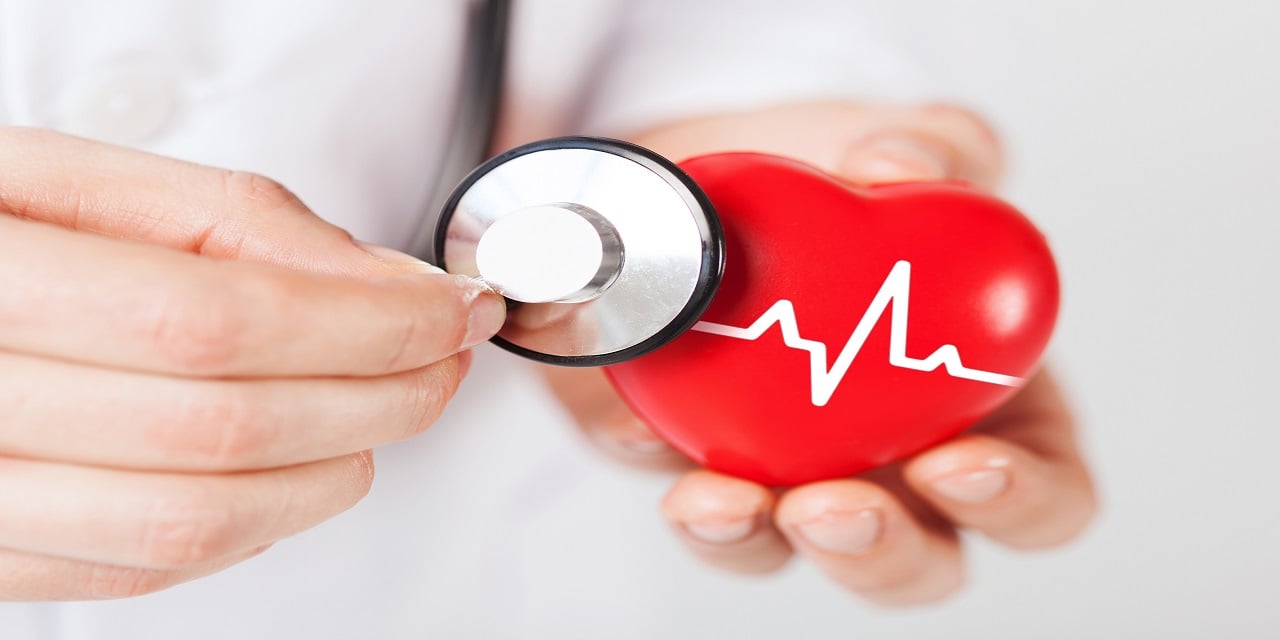