Hot Topics in Tech | May 2019 Newsletter

In the May issue of the “Hot Topics in Tech” newsletter series, we present a brief introduction to on-the-go charging devices and showcase a few exemplary patent documents with illustrations. This issue also provides a quick overview of the patent landscape in the field of intraoral scanners.

Battery-powered portable devices such as smartphones or smartwatches are already indispensable for many of us. The state‐of‐the‐art batteries used in such devices still require frequent recharging. Advanced energy storage devices and energy harvesting devices, such as solar cells, piezoelectric nanogenerators, triboelectric nanogenerators, and thermoelectric generators have been touted as potential solutions to recharging such devices. Energy harvesting generators may be particularly suitable for low-power wireless electronic devices. These devices harvest energy from several sources, such as i) body heat during workout, ii) mechanical stress, iii) motion and iv) sound.

Body heat generated during a workout can be harvested using several thermoelectric coolers (TEC) or peltier tiles. These devices convert thermal energy, such as body temperature, into electrical energy. Matrix Industries launched a smartwatch – the MATRIX PowerWatch – in 2017 that’s powered by the wearer using an advanced thermoelectric technology. Samsung’s US patent application, 20160118566, titled “Wearable Device Having Thermoelectric Generator”, describes a device having a junction exhibiting a Seebeck or Peltier effect. Figure 1 below illustrates the schematic plan view of a wearable device having the thermoelectric generator, described in the invention. The wearable device includes a main body and an electronic device disposed in the main body. The main body is disposed to contact a human body or the skin of an animal. The main body may be a strap or a band that surrounds a wrist, an arm, a leg, a chest, or a head of a user, including a human being or an animal. 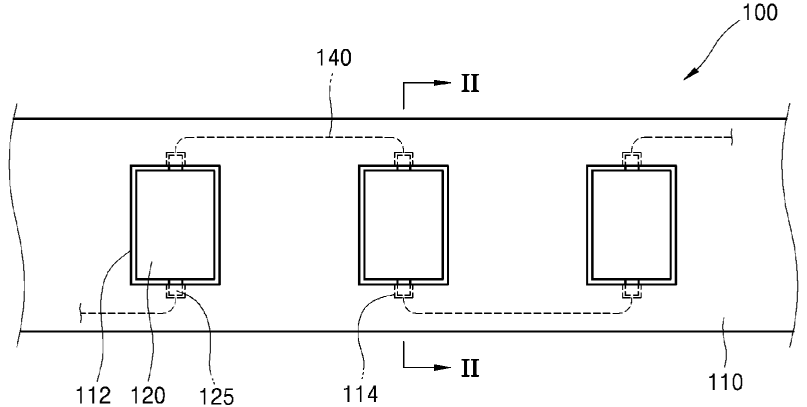 Fig. 1: A schematic plan view of a wearable device having a thermoelectric generator

When mechanical stress or mechanical excitation is applied to the human body, this excitation directly affects the bones. Bones produce a current as a consequence, which is known as piezoelectricity. The Moov chair converts the sitter’s movements into electricity using piezoelectric crystals located under the cushion. US patent 10,187,773 discloses wireless coded communication (WCC) devices with power harvesting capabilities. Fig. 2 below illustrates a WCC device, in accordance with an embodiment of the invention. The WCC device (100) includes a power supply (104), a power storage (106), and logic/wireless Rx/Tx circuitry (140). 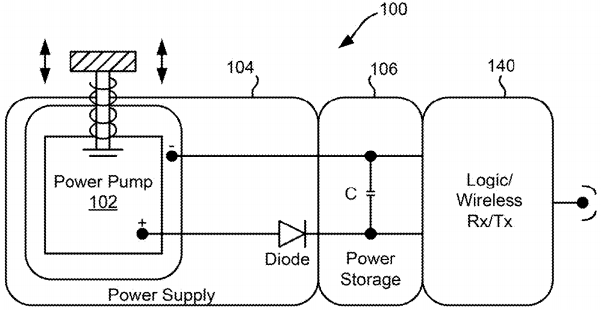 Fig. 2: An illustration of the WCC device that includes a full wave rectifier

Motion is one of the main sources of energy that can be harvested, and a wide range of motion-powered energy harvesters have been proposed or demonstrated, particularly at the microscale. US patent 7,652,386 describes an apparatus for harvesting energy from the motion of one or more joints. The patent describes a generator for converting mechanical energy into electrical energy, sensors for sensing characteristics associated with motion of the joints, and control circuitry connected to receive the sensed characteristics and configured to assess and engage in energy harvesting when the assessment is favorable. Fig. 3 below depicts a wearable energy harvesting apparatus, according to the invention. The harvesting apparatus (60) operates to harvest energy from the motion of knee joint (62) and the corresponding knee extensor muscles and knee flexor muscles.

FIG. 3: An energy harvester that is mountable on the body of a host

Acoustic vibrations can also be harvested to power batteries. U.S. 9,084,859 presents an energy harvesting respiratory device. Healthcare gadgets that allow wireless sound charging, such as the invention described in 9,843,229 by Energous Corp, describe transmitters and receivers that are positioned in strategic places so as to have a wide range for wireless power transmission to portable electronic medical devices and wireless sensors.

A sharp rise in patent publications (as shown in Fig. 4) can be seen for such non-conventional energy harvesting technologies for portable devices. Some of the top applicants in this field include Samsung Electronics, Nike, Sony, Adidas and Fujifilm. The geographical distribution reveals that the USA, China, and Korea are the main jurisdictions for the patent applications. We also discovered a good mix of PCT applications, suggesting that the applicants are after the global market for such energy harvesting devices. 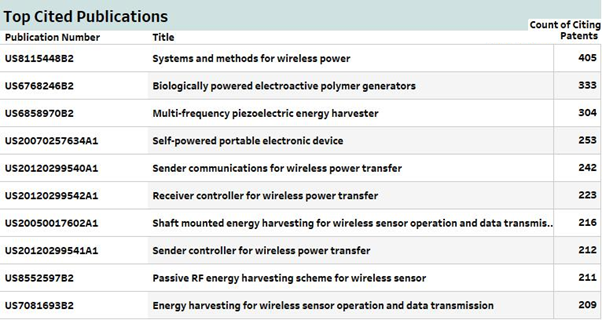 The new recharging solutions offers many advantages over existing options including on-the-go self charging, reduction in electronic waste in the form of charging adapters and power banks, a reduction in greenhouse gas, wireless options that allow flexibility and movement around the area. Some of the bottlenecks to overcome is the slow charging time, expensive nature of the technology and maintenance cost involved in the use of such devices. With additional research towards promising solutions such as energy harvesters, and wearable self charging power systems, we may soon make advances in this promising technology. Conventional methods of charging gadgets may soon become obsolete.

Patent Filings On The Rise In The Field Of Intraoral Scanners

Imaging procedures with varying degrees of invasiveness are employed by medical professionals to diagnose or treat a particular condition. In the field of dentistry, intraoral scanners (IOS) are routinely used alongside CAD/CAM (computer-aided design and manufacturing) technology to register the three-dimensional geometry of dental tissues for dentures.

An intraoral scanner is a medical device for recording the tooth morphology. A typical intraoral system includes a handheld camera unit, a computer, and software. The images recorded by the camera are compiled by software to generate computerized, 3D digital images of the intraoral region. Intraoral scanners are easy to use and cost-effective. Previous studies have demonstrated that intraoral digital impression technique was more efficient than the traditional impression technique.

Intraoral scanners have been around for a while. Recent intraoral scanners have moved to systems with color video acquisition from monochromatic image acquisition for improved accuracy. Some of the products in the market include 3M™ True Definition Scanner, 3Shape TRIOS 3Wireless, CS 3600, CEREC Omnicam, Condor, Virtuo Vivo™,iTero Element, Planmeca Emerald™, and VIZ® intraoral scanner. Fig. 6 shows a few intraoral scanners from the market. The scanners in the market have differences in several parameters such as scanning speed and flow, size of scanner and ease of use, cost and subscription requirement, operation mechanisms, such as open or closed scan exporting, the option of autoclavable scanning tips, touch screens and wireless options for the integrated devices, caries detection and CAD integration. 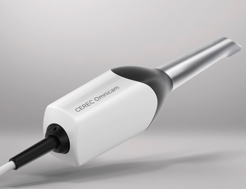 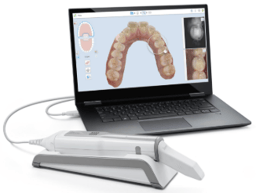 Exemplary patent publications in the technology include Sirona Dental’s US patent 7,335,876 that describes a scanning system for obtaining a 3D scan of a tooth model, which includes an imaging device and a positioning system in the form of a novel sliding pane. Align Technology’s US patent application 20180192964 for intraoral scanners describes a computing unit that detects the anatomical structures by means of a non-invasive method. 3Shape's granted patent EP2654607 discloses an intraoral scanner for obtaining a 3D geometry of a part of a patient's denture comprising a camera and an array of sensor elements. Carestream Dental's US application 20180296080 reveals an intra-oral scanner for obtaining 3D surface images of a tooth comprising an illumination source, a detector, a logic processor, a computer and a display that work together to allow surface contour characterization. Vatech’s US application 20170289523 presents an intraoral scanner system comprising a scan unit sequentially imaging an intraoral structure in a scan mode, a control unit generating a 3D modeling image for each scan mode by using the imaged intraoral structure, and a display unit displaying the 3D image, wherein the control unit switches the scan unit from a present scan mode to a following scan mode according to a command that is input by the user.

The market size for intraoral scanners was estimated at $190 million for 2018, and is expected to reach $460 million by the end of 2025 at a CAGR of 11.8%. Some of the factors driving the market include growth in Asia-Pacific markets, the growing geriatric population (65 years and above) and the associated tooth related problems with aging, and technology adoption by dental practitioners. 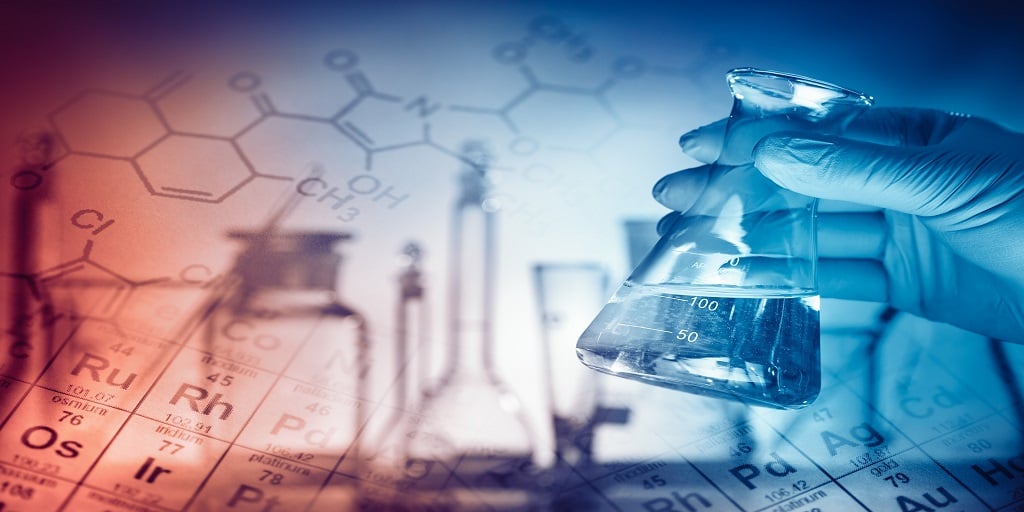 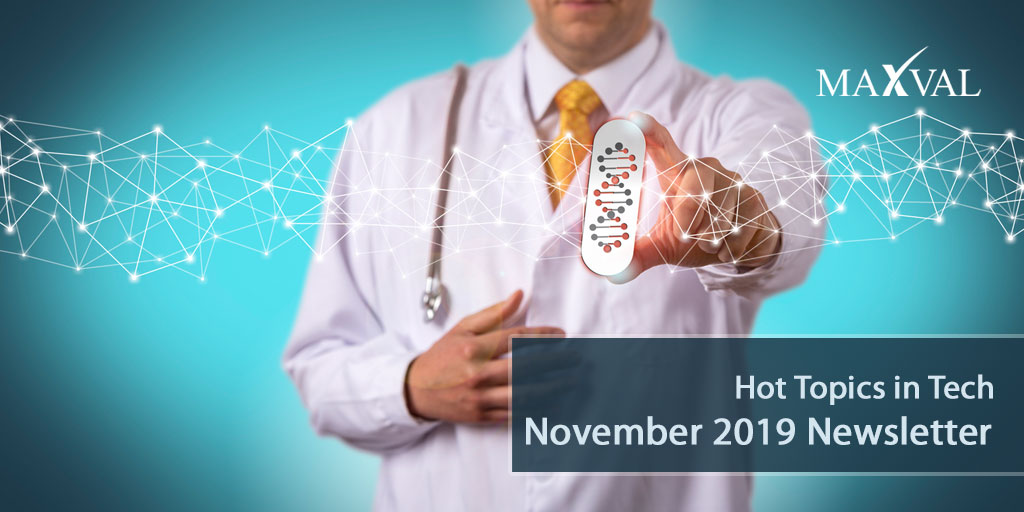